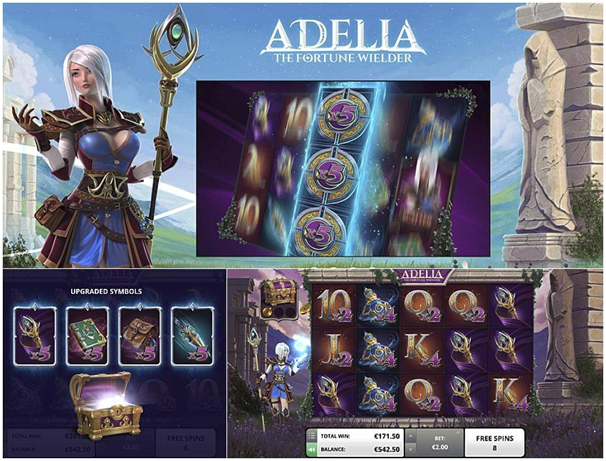 Adelia: The Fortune Wielder pokies by Foxium released through Microgaming is new adventurous pokies game with a 5-reel, 20-payline pokies set in a supernatural fantasy world. You will follow a sorceress Adelia, who is an apprentice of a powerful sorcerer. Her goal is to restore the ruins of an ancient temple and all who help her will be lucratively rewarded for their trouble. Prepare yourselves for plenty of free spins, respins, stacked Wilds and Multiplier Wilds. Collect coins and use the power of Adelia’s magic to upgrade your symbols and win even bigger payouts. This visually impressive action-packed game is playable from £0.020 per spin. 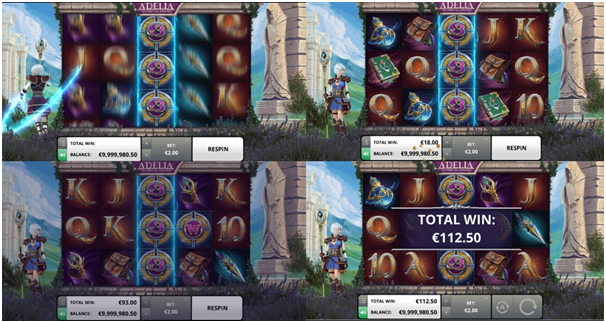 Apart from standard 10-A playing cards icons that serve as low-paying symbols, you will be given a chance to experience the true power of sorcery from this mystical supernatural land by using the Sorcerer’s Staff, his mighty Book of Spells that reveals the ancient magic from the beginning of time, the Pouch, the deadly Dagger and the powerful Potion. Adelia will follow you on this important mission, since she will stand next to the reels, performing her magic spells. She is also the Scatter that triggers free spins. The regular Wild appears on reels 2, 4 and 5 in the base game and substitutes for all regular symbols, while the Multiplier Wild can appear only on the central reel and gets you a random 2x-5x multiplier.

The game play is simple in this standard 5×3 layout and offers 20 fixed paylines that pay left to right, starting from the leftmost reel. You can start with bet as low as £0.20 and as high as £20 per spin. Three of a kind is the minimum for landing payouts. The interface is easy to use, it’s also very simple to understand and offers all the usual options that you need to play pokies on your mobile. You can play this pokies game for free or for real money play that’s but your choice. 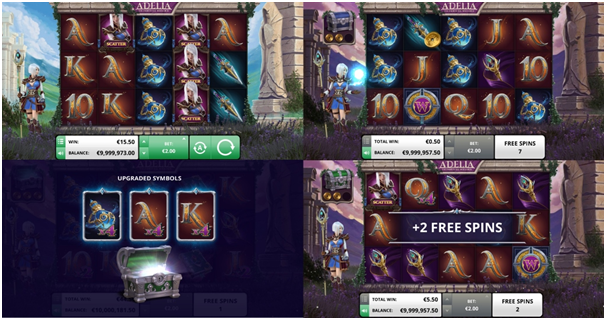 This pokies game offers lots of exciting features in the game. The Wilds tend to land in stacks, especially on the middle reel where you get Multiplier Wilds, which can reveal 2x-5x multipliers. Fill the entire reel 3 with Multiplier Wilds and you will trigger the Adelia’s Fortune Respin feature. The Wilds will be locked on their positions and you will get respins until a non-winning spin occurs.

Adelia Scatters can appear only on reels 2 and 4, but they also land in stacks. At least four Scatters are needed for the Free Spins feature to be triggered. Four, five or six Adelias on the reels will get you 10, 20 or 30 freebies. During the feature Coins can appear on the reels. Collect them and fill the Blue Chest, Green Chest and the Purple Chest to start the symbol upgrade and get 3x-5x multipliers on wins. Three Coins in the Blue Chest and the Green Chest will upgrade payouts the playing cards symbols, and the Potion symbols, while the Purple Chest will upgrade payouts for Staff, Book, Pouch and Dagger. 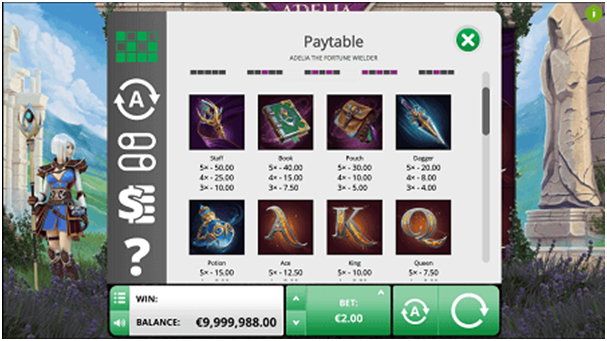 The maximum possible payout is set at 50,000 coins per spin, which is just awesome. Both respins and free spins can result in mind-blowing payouts thanks to plenty of possible multipliers. The mighty Sraff pays the most, offering 25 times the bet for five of a kind, but the Book of Spells is also very rewarding, giving gamers 20 times the bet for the maximum combination.  The power of magic is used for good and Adelia will provide plenty of winning opportunities with a simple swing of her powerful Staff. Respins and free spins come with tasty multipliers and the symbol upgrade will boost your wins, so you will love to play this pokies on your mobile. 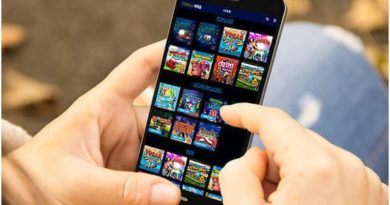 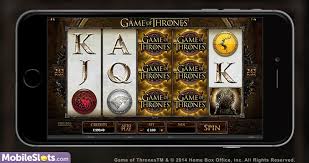 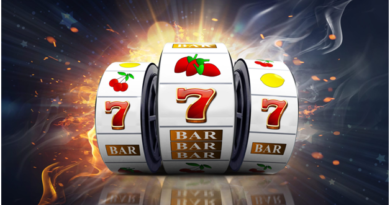