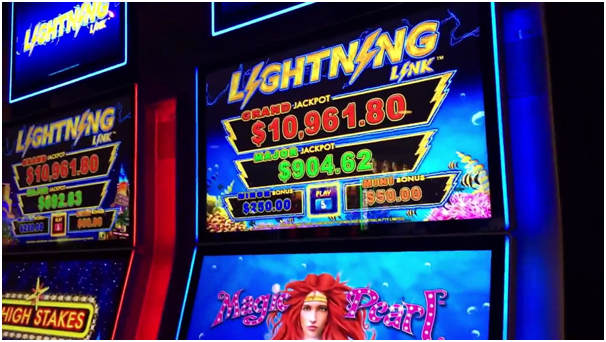 Lightening Link pokies is one of the most popular pokies developed by Aristocrat gaming company. This pokies machine is not

END_OF_DOCUMENT_TOKEN_TO_BE_REPLACED

There is an assortment of fantastic new and classic Aristocrat pokies for an electric free pokies experience. Each of these games share key features which make up the lightning link system. While this includes a free spins game, the main attraction is the linked progressive jackpot.

All of the games are played over either 25 or fifty lines and players can expect coin denominations that run from one to ten cents, with a couple of other options in between. The whole point of the games being linked is of course so that a number of different players can all contribute to the same progressive jackpots as they play, while all standing a chance of winning them too. All Lightning Link cabinets offer four tiers of jackpots and, with the top one being seeded at $10,000, they are all well worth getting involved with.

The Lightning Link range High Stakes is one of the first games to start with. The game makes use of a Hold and Spin feature where you can put your mathematical skills to the test as you decide where the value lies when it comes to improving your board state. There’s a free games bonus too, which comes complete with giant symbols on the central reels that can easily allow you to win particularly to the use of fifty win lines. The jackpots are symbol driven too, so you’ll definitely know when you’ve hit it big on this game.

Happy Lantern is another great Oriental themed game with some great animations, free spins and of course the top notch jackpot prizes on display, this 25-line game brings together classic Aristocrat action and the latest features for a unique, highly exciting gameplay experience.

Sahara Gold pokies is similar to High Stakes, with the Hold and Spin feature being in effect once again alongside free spins and fifty lines of action. The free spins bonus in particular is well worth checking out as the number of spins is assigned randomly, as is the number of bonus wilds that are all set to play a massive part in proceedings as players enjoy all of the action.

Magic Pearl shares plenty in common with Sahara Gold and High Stakes, with fifty lines of action in play and the highly popular Hold and Spin feature leading to big wins, covering both fixed prizes and the progressive jackpot amounts.

Moon Race retains the Hold and Spin feature to set up some big jackpot wins and is technically very similar to Best Bet pokies game. The theme is based on space and astronomical shuttles which you will like to enjoy spinning.

Best Bet is horse racing theme with the Hold and Spin feature action that can lead to multiple jackpots being won all within a single feature. There are fifty lines in play and the bonus free spins round is particularly enticing thanks to the fact that up to 25 spins can be won with all of the playing card icons being removed from the board in the process.

In Heart throb you will let your heart go wild in this lightening pokies series as the game will be instantly accessible to take the volatility to the fact that wild wins in the feature round are instantly doubled compared to the base game.

Tiki Fire is another awesome pokies from Aristocrat in the lightening link series and is similar in function to the Heart Throb with increased volatility once again coming down to the use of a wild multiplier during free spins.

Bengal Treasure is an Indian themed pokie in the lightening link series with great jackpot action and with some great animations backing up the rather traditional appearance of the board. Fifty lines ensure some fast paced action and this gets even bigger and better within the free spins round as players take advantage of stacked symbols that become increasingly available as the round plays out.

Wild Chuco pokies is similar  with Bengal Treasure, with great visuals and animations with the combination of fifty lines and the increasing availability of stacked symbols ensures that you will have every chance of putting together some massive wins.

The base game of any of the themes is much like any other, where you’ll need to land three or more consecutive symbols from left to right on a win line. These will obviously differ from game to game as you’ll find different symbols, however what is the same across all the games are the two bonus features.

On each of the themes you’ll need to land three scatter symbols to activate the free spins bonus round. This round sees you given just 6 free spins, however you’ll notice one big difference. During each of the free spins you’ll see that reels 2, 3 and 4 will be completely taken up by just one giant symbol. This means that should the same symbol appear on reel one, you are guaranteed a 50 or 25 four of a kind wins depending on what setup option you went for, while the same symbol appearing again on reel 5 should make for a very nice payout indeed.

During the base game you’ll find a number of coins appearing on the screen, these coins displaying either a credit value or one of the three smaller Jackpots Major, Minor or Mini. If you land three or more of these across any of the reels, you’ll immediately win the prizes on the coins, whether that is a Jackpot or not. At this point all of the coins will remain frozen, while the rest of the reels will spin again. If you land another coin within the next three spins, this will join the sticky coins and you’ll win this amount too. Every time you land a coin, you’ll have three more attempts to land another one. This will usually see the reels fill up pretty quickly and can land you a nice combination of the smaller Jackpots, as well as a number of cash amounts. However, if you can manage to fill the reels completely with coins, the Grand jackpot will be yours.

You can play any of the themed games at Lightning with either 50 lines or 25 lines, depending on the denominations you want to play for. For 1c and 2c games you’ll play the maximum 50 lines, while for 5c and 10c games you’ll play 25 lines. You’ll notice however, that the bonus amounts that appear on the reels will be proportional to the coin amount, although the Jackpot payouts remain the same whichever denomination you use.  Each of the titles has a max bet amount of 500 credits if playing for 1c or 2c and 250 credits if playing for 5c and 10c.

The game is described as medium to high volatility range. This effectively means that you may have to wait a little longer than usual to land a win in comparison to other pokies, but when you do win the wins will be on the larger side. This is especially the case when it comes to the Jackpot round, where you’ll find yourself winning many of the prizes each time you enter.

Where can you play pokies with Lightning Link?

You can play pokies with lightning link with your Nokia mobile or any Android smartphone with the Lightning Link app that is available all free at Google Play store.