Nokia had its first Android tablet, the N1. Nokia has licensed its brand to the Taiwanese manufacturing giant Foxconn, and it should be no surprise that there is an Apple-level air of quality to it. The whole thing is made from a single block of aluminium and there are no seams or joints.

It’s also running Nokia’s Z Android launcher, which is available in beta form in the Play Store if you want to try it on your device.

Powered by a 64-bit Intel® quad-core processor, Nokia N1 is smart and fast. And it has the looks to match – a one-piece aluminum body, sandblasted for a satin finish.

From the zero air-gap display to its perfect balance, everything has been crafted for thinness and lightness in terms of looks, the Nokia N1 is most like a first-generation iPhone, with rounded edges and corners but flat on both sides. It’s available in two colours, Lava Grey and Natural Aluminium.

The finish is anodized so it offers a grip but still feels smooth. There are no slots or panels for SIM and microSD cards – the N1 is Wi-Fi only and its storage cannot be expanded. At 6.9mm thickness and a weight of 318 grams, this is a very portable, yet physically strong tablet. With a 7.9-inch 2048 x 1536 IPS display that’s 329 pixels per inch, which is roughly the same as the 324 ppi iPad mini 3. 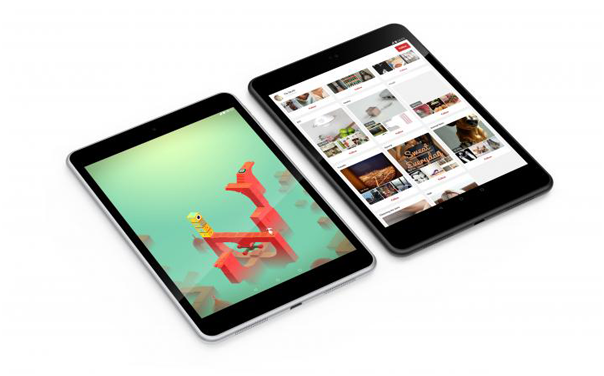 It certainly seems to be one of the better looking tablets around, though it also looks remarkably similar to Apple’s mini.

Under the hood there’s a 2.3GHz 64-bit Intel Atom Z3580 processor and 2GB of RAM, which should give it a reasonable amount of power. It’s rocking 32GB of storage, though seemingly there’s no microSD card slot, which could prove limiting for media fans.

The N1 has an 8MP main camera and a 5MP front-facing one so if you absolutely must use it to take photos it should hopefully at least be able to take some half decent ones.

The Nokia N1 also has dual stereo speakers and a 5300 mAh battery. The slate, which runs Android 5.0 Lollipop, comes overlaid with the Nokia Z launcher. It adapts to you, with the aim of keeping the most relevant apps and features front and centre, while scribbling a letter on the screen will enable you to quickly search for other apps.
Interestingly it also supports a reversible USB connector, which can be plugged in either way round meaning you won’t have to do the USB dance any more, though it only supports USB 2.0. 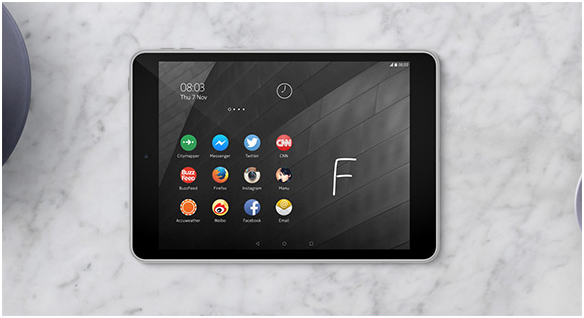 Nokia N1 comes with Nokia Z Launcher, the home screen that makes things simple. Just scribble a letter to find what you’re looking for – instantly. Plus, it adapts to where you are and what you’re doing to bring you the right app, right when you need it.

The Z Launcher actually a pretty interesting concept, and this is by far the most stable incarnation  seen to date. The elevator pitch is the software learns what apps you use and when. Let’s say you use your tablet at your nine-to-five to keep up with emails and edit documents. During those hours, when you power on the tablet it’ll show you Gmail, Word, Excel and the other apps you regularly use. Maybe at night you’re all about Twitter and Netflix, and after hours those are the apps you’ll see.

Nokia says after a few weeks of regular use, you’ll hardly ever have to tap on the screen more than once to get to where you want to be. If the app you want isn’t immediately displayed, though, you do have a couple of additional options.

You can draw out, say, an “e” on the screen to get a list of all apps starting with that letter, or if you’re feeling less adventurous, you can swipe in from one side to get a full A-Z list. And that’s pretty much it for the Z Launcher — there’s literally nothing else to it. If its adaptive behavior works as well as claimed, and Nokia can get it stable and out of beta, it’s a compelling vision for any tablet.

The Nokia N1 is currently available only in China, priced at approximately $260, but can be picked up from Amazon for a comparatively far steeper $459. Keep in mind that the device available from Amazon is still the Chinese version, and does not support Google Play services, and it is recommended to wait for the international release that should be happening shortly.